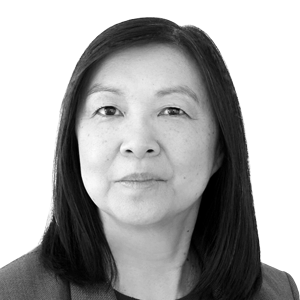 Alice Wong is an influential and respected leader who challenges the status quo by asking tough questions and pushing for fairness and progress. As Senior Vice President & Chief Corporate Officer at Cameco, one of the largest global providers of the fuel needed to energize a clean-air world, she is a tireless champion for the advancement of women in a male-dominated industry. Alice has been a leader during a challenging time; between 2014 and 2020, Cameco reduced its workforce by nearly 40%. Despite these cutbacks, Alice worked with the Cameco leadership team to make a meaningful commitment to advancing women over that same time period. They succeeded in increasing women’s overall representation from 23% to 25% and management-level representation from 15% to 25%. In addition to her championship of women, Alice has provided leadership for the first-collaboration agreements with Cameco’s Indigenous communities, helping the organization become one of Canada’s largest industrial employers of Indigenous Peoples. She is a true role model for inclusive leadership.

Alice is widely known for setting the standard for leadership that people want to emulate, serving as a role model at Cameco for women and men alike.

As an advocate for increased gender equity at the organization, Alice personally conducted coffee chats with more than 425 women over a one-year period to better understand workplace attitudes toward inclusion and the impact of unconscious bias. As a result of these meetings, Cameco rolled out several initiatives aimed at supporting its women, including mandatory training on unconscious bias, bullying, and harassment. Alice also spearheaded the amplification of International Women’s Day at Cameco, recognizing that the holiday offers an important, high-visibility opportunity to support gender equity.

Outside the organization, Alice has also taken on several key initiatives to increase the number of women in the nuclear industry. She is currently leading a team of industry leaders to address the gap in representation.

Alice demonstrates courage and humility in her leadership style, behaviours that are hallmarks of inclusive leadership. She consistently challenges the status quo by asking tough questions and pushing for fairness and progress. She also holds her teams accountable for their actions by calling out behaviours that do not align with Cameco’s values. With a questioning mindset and approach, Alice is a visionary who is not afraid to tackle inequities or explore uncomfortable truths. She is known as a respected coach and mentor and an inspirational leader.

Alice was appointed Senior Vice President and Chief Corporate Officer of Cameco in July 2011, and provides executive oversight for HR, health and safety, environment, quality, regulatory relations, business technology services, supply chain management, and corporate ethics. With more than 30 years at Cameco in increasingly senior leadership roles, Alice has been involved in a number of different areas including corporate responsibility, communications, community investment, government relations, and investor relations. Before joining Cameco, Alice held part-time positions as a sessional lecturer at the University of Saskatchewan, an economics instructor at Saskatchewan Polytechnic, and a CRA auditor.

In 2012, Alice was named as one of SaskBusiness’s 2012 Women of Influence. In 2018, she was named a Diversity 50 Board Ready Candidate by the Canadian Board Diversity Council and an Alumni of Influence by the University of Saskatchewan’s College of Arts and Science.