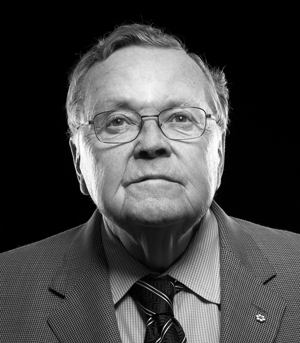 Purdy Crawford has always believed in the power of diverse leadership and the talent that women can bring to the boardroom table. Beginning at Dalhousie Law School, which he attended along with Bertha Wilson, the first female Canadian Supreme Court Justice, and Constance R. Glube, a Nova Scotian who was the first female Chief Justice of a Canadian court, Mr. Crawford has long been able to look beyond gender and identify strong talent and business savvy. It’s unlikely there is anybody else in Canada who has helped to support and develop as many women leaders, or helped to create such a robust pipeline of talented women for corporate board service.

Having touched the careers of countless lawyers, CEOs, corporate directors, and board chairs, the name Purdy Crawford is synonymous with mentor and sponsor for many of Canada’s senior business leaders. During his time as CEO of Imasco Ltd., he sponsored Annette Verschuren to an executive role within the company. He was proven right about Ms. Verschuren’s potential;  she later moved on to such high-profile roles as President of Home Depot Canada and board director at companies such as Air Canada, Liberty Mutual, and Saputo Inc. Purdy Crawford continues to mentor women, preparing them for corporate board service through the Women On Board® Mentoring Program.

“There were female lawyers who were recruited by the firm either through law schools or later on in their careers. My role, along with others at Osler, was to work with these lawyers and help them develop their accountability and leadership skills so they could take advantage of their abilities.”

For Mr. Crawford, developing female leaders is about creating an inclusive corporate culture. As the father of five daughters and one son, all active members of the business community, he has worked to ensure that his own children’s careers were not hindered by the type of discrimination he witnessed early on in his own career. This goal is strengthened by his belief that increased diversity in leadership is essential to creating a strong organization, and that the inability to recognize talent is detrimental to business, especially in the boardroom.

Purdy Crawford is a native of Five Islands, Nova Scotia, and a graduate of Mount Allison University, Dalhousie Law School, and Harvard Law School. He was called to the Nova Scotia Bar in 1956 and to the Ontario Bar in 1958. Mr. Crawford served as CEO of Imasco Ltd. from 1985 to 1995, and as its Board Chair from 1987 to 2000. He was named an officer of the Order of Canada in 1996 and elevated to Companion of the Order of Canada in 2007. Mr. Crawford was also inducted into the Canadian Business Hall of Fame in 2000. In addition to his role at Imasco, he was Board Chair at CT Financial Services and Canada Trustco Mortgage and Lead Director at Maple Leaf Foods. Mr. Crawford is currently a board director at several Canadian companies and is Chancellor Emeritus of Mount Allison University.

As the landscape continues to change and momentum builds for increasing the representation of women on Canadian boards, Canada is fortunate that Purdy Crawford’s championship has provided a strong pipeline of talented women leaders who are all eligible for seats at the table.

Sadly, Mr. Crawford passed away in Toronto on August 12, 2014, after a long illness. His legacy will be reflected by the many Champions who role model his behavior.