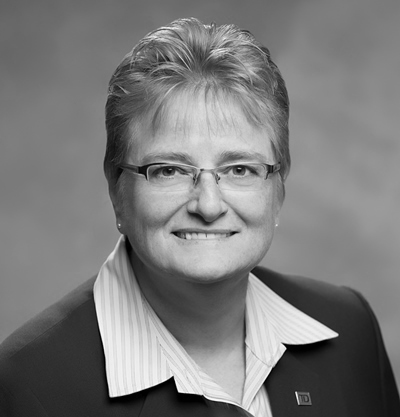 Carol Osler didn’t grow up thinking that she was restricted by gender barriers, so when she encountered them in her first job in security, she stepped up to create change. Throughout every stage of her career, Ms. Osler has been a passionate advocate for diversity, initiating opportunities for women to flourish in Security and Business Operations Management. A true trailblazer, Ms. Osler has broken down barriers and opened the door for diversity in a typically male-saturated industry.

Ms. Osler is SVP Financial Crimes & Fraud Management Group at TD Bank Group. As a gay woman, Ms. Osler understands what it means to be marginalized, and she works tirelessly to give others a voice. Since beginning at TD in 2009, her leadership has been transformational. Within Fraud Management, Ms. Osler has re-structured the teams to become more diverse, developed a healthy talent pipeline of women, and acts as a strong advocate for the LGBT community throughout the Bank and the Canadian business community.

Ms. Osler is also heavily engaged in TD’s Diversity and Inclusion (D&I) efforts and has been instrumental in fostering collaboration among its D&I groups. She serves on TD’s Women in Leadership Committee and created the Women in Leadership Corporate Shared Services chapter to promote the development of women in security and investigations. She is also on TD’s LGBT Committee. Ms. Osler leads by example, taking every opportunity possible to promote D&I within her department, the organization, and the outside community.

Promoting D&I is especially challenging in a male-dominated industry, and Ms. Osler’s persistence and dedication have allowed her to drive change in every role she has occupied. When Ms. Osler began at TD, she led a predominantly male Global Investigative team. Motivated by the belief that her team should reflect the diversity of the people it serves, the first thing she did was restructure the team to include more women and individuals from diverse backgrounds. She did this by reassessing what skills were required to be successful and retooling capabilities to attract diverse candidates.

Through her professional mentoring of women in Fraud and Security, Ms. Osler continues her strong focus on leadership development of women in male-dominated industries. She takes a deliberate approach to mentoring women through various stages of their careers, developing a pipeline of talent, setting out a program that looks at each woman’s skill set, personal goals, and aspirations and creating a unique development plan that includes growth opportunities within the company. Today, as a result of these efforts, her team of 700 people comprises approximately 60% women.

Prior to TD, Ms. Osler worked at the Metropolitan Toronto Housing Authority, where she played a pivotal role in restructuring how the organization attracts talented women. She was one of the first security leaders to advertise a job citing a preference for women. As more women submitted applications, Carol ensured bias was removed from the hiring process by speaking with senior leaders, helping them become aware of and address their own stereotypes.

The Catalyst model of inclusive leadership includes four key attributes: Empowerment, Accountability, Courage, and Humility, or EACH. From the day Ms. Osler began her career at an elite security company, through her work with Metropolitan Toronto Housing Authority to her current role at TD, she has exhibited true courage. While working as a security guard, Ms. Osler was excluded from performing certain tasks because of her gender. She was told to take self-defense classes only to be kicked out of the class when she showed up. Rather than give up, she carried out the tasks anyway, proving her abilities and forcing the organization to remove the gender barrier for others.

Understanding and experiencing the struggle of being gay in the business community, she promised herself that once she was in a position of leadership she would do all she could to ensure her employees felt included and had opportunities for advancement. Today, Ms. Osler makes a point of being transparent and speaking openly about her sexuality. She believes that at her level she has both the obligation and opportunity to make the workplace more inclusive for others. She is a mentor and sponsor to many, and freely shares personal stories to give junior colleagues the courage they need to bring their full selves to work.

Ms. Osler has more than 30 years of experience in Security and Business Operations Management, including international work addressing security challenges in countries lacking strong law enforcement. An expert in leading large-scale transformation initiatives, she has built and expanded corporate security programs within highly regulated, complex organizations. In 2015, she was named one of Canada’s Most Powerful Women by The Women’s Executive Network Top 100 Awards for the second year in a row. Ms. Osler was also recognized by the National Association of Professional Women as a 2015 VIP Woman of the Year. In 2012, she was named Security Director of the Year by Canadian Security magazine and received the Deloitte Out on Bay Street Professional Leadership Award.