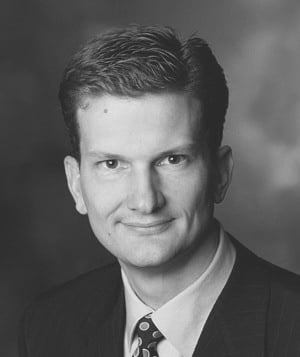 Bill Thomas is a Canadian business leader who believes deeply in the power of inclusive workplaces. As CEO of KPMG in Canada and Chair of KPMG’s Americas Region, he has built a diverse and inclusive culture, promoting opportunities for women, minorities, and members of the LGBT community, and earning a reputation for challenging the status quo in the process. His inspiring leadership has been recognized within KPMG as well as in the larger business community.

Mr. Thomas has been a champion of women within all facets of the firm. He has long championed KPMG’s Women in Line for Leadership (WILL) program, a sponsorship initiative designed to prepare women in senior management positions for partnership. He has also sponsored women at KPMG for participation in the Judy Project, an acclaimed Rotman School of Management program that prepares women for executive-level and CEO positions, and he instituted a requirement for each Management Committee member to sponsor women partners for further advancement within the partnership. Thanks in part to these efforts, the number of women partners at KPMG has increased since 2009, and the percentage of women on the firm’s board of directors has grown to more than 30%. The firm’s national leadership team, which Mr. Thomas also oversees, now includes women in four C-level positions—Chief Financial Officer, Chief Human Resources Officer, GTA Regional Managing Partner, and Chief Inclusion Officer—all of whom are outstanding role models for other women at the firm.

“I am tremendously honoured and humbled to be named as a Catalyst Champion. We have an amazing team that strives every day to create an environment where every one of us can be successful and feel included.  This recognition is a testament to all of their hard work and effort.” —Bill Thomas

In 2014, recognizing that to create a truly inclusive environment the organization must also adapt, Mr. Thomas instituted training to combat unconscious biases for KPMG’s national leadership and its board. This training proved to be an essential step in driving cultural change, and Mr. Thomas has since championed its implementation at all levels of leadership. Additionally, Mr. Thomas chairs KPMG’s National Executive Diversity Council and has demonstrated ongoing, visible support of LGBT employees, as well as of visible minorities. A strong believer in measurable outcomes, Mr. Thomas has taken action to hold KPMG’s Board Nominating Committee accountable for ensuring that candidates for board service reflect the firm’s overall diversity.

Under Mr. Thomas’s leadership, KPMG signed the Catalyst Accord, a call to action for FP500 companies to increase the representation of women on their boards to 25% by 2017. He is also a member of the Catalyst Canada Advisory Board, and he has been a featured panelist at events designed to engage men in achieving gender equity.

In 2014, Mr. Thomas provided important commentary in support of the Ontario Securities Commission on its proposed changes to board governance regulations, which were intended to encourage greater representation of women on boards. These new regulations went into effect in December 2014.

Mr. Thomas has played an enormous role in creating a culture of diversity and inclusion at KPMG and has been a strong advocate for change in corporate Canada. He is a true role model of inclusive leadership.