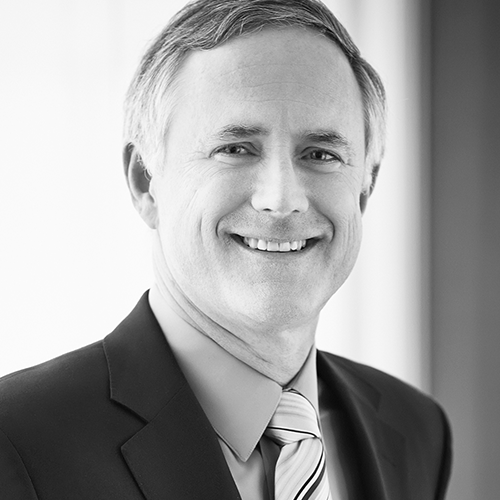 When Bill McFarland became CEO of PwC Canada in 2011, he recognized the lack of diversity on the formerly all-male leadership team, pointing out that it consisted of “three men from Toronto who all look like me.” Since then, his determination to make changes and his leadership by example have helped PwC Canada achieve sustainable progress towards a more inclusive workplace.

Evidence of the changes set in motion through Bill’s efforts can be found in the composition of PwC Canada’s senior leadership. Two out of the five members of his leadership team are now women. He sponsored the first woman to chair the firm’s Partnership Board, and influenced the Board to change its bylaws to require at least 30% female representation.

As CEO, Bill is also holding his leadership team accountable for advancing more women into the firm’s management, making each senior leader responsible for sponsoring at least two female partners and helping to achieve the firm’s target of gender parity among new partner admits by 2020. Since Bill began his tenure as CEO and Chief Inclusion Officer, there have been significant increases in women partner admissions in the two largest business units: from 33% to 42% in Assurance, and from 22% to 55% in Tax.

Bill’s efforts are rooted in his determination to be the change he wants to see at PwC Canada. He both leverages his position to accelerate inclusion and is a role model for other leaders to emulate. For example, he is a sponsor of women at the firm, using his influence to help women advance into key roles. His efforts have resulted in many success stories, including PwC Canada’s first woman board chair and the first woman managing partner of the greater Toronto region, PwC Canada’s largest market. He also called two of the firm’s largest clients to advocate for PwC Canada’s top female partners to lead their portfolios.

In addition to his own efforts to sponsor women, Bill holds other leaders at the firm accountable for doing the same. He expects them to support and develop the diverse talent on their teams, and empowers them to identify and sponsor top-performing women directors and senior managers who aspire to be partners at the firm.

Bill’s leadership is a clear example of empowerment. In using his influence to mentor and sponsor top female talent at the firm, he enables women to excel in their positions and advance in their careers.

Bill also demonstrates accountability and holds his leadership team responsible by setting a firm-wide aspirational goal of achieving gender parity in new partner admits by 2020, and creating a path to progress that aligns with the firm’s overall goals. In this way, he shows his confidence in his team’s ability to create change.

Bill is the CEO and Chief Inclusion Officer of PwC Canada. He was admitted as a partner in 1992 and led the GTA Assurance practice—the firm’s largest business unit— from 2002 to 2005. Prior to becoming CEO, Bill served as a member of the Canadian Leadership Team from 2005 to 2011. He is the senior relationship partner on many of the firm’s largest client portfolios and is also a member of PwC’s Global Strategy Council.

As the Chief Inclusion Officer, Bill is a passionate advocate for diversity and inclusion. He has committed to the United Nation’s global HeForShe movement—which PwC is a founding IMPACT champion—to support gender equality and the advancement of women in the workplace.

Bill graduated from the University of Toronto in 1980 and is an FCPA. He is active in the community and is currently the Chair of the Board of The Conference Board of Canada and a member of the Business Council of Canada. He is a sports enthusiast and cyclist and is married with three sons.